She is a gorgeous sportscaster, and she is very talented too. Her immense beauty has hypnotized viewers all around the world. She is down to earth, she is beautiful, and she will stay here for an extended period. She is none other than the splendid looking Heidi Watney.

Heidi Watney is one of the hottest and most beautiful American sportscasters who is known for anchoring and reporting Quick Pitch for MLB Network.

Heidi has been linked to many people before she got married. She got linked to Boston Red Sox catcher Jason Varitek, a married man in 2008. The rumors began to swirl after the two were seen together at a Baltimore Bar together. Soon after that, Jason Varitek filed for divorce with his 10- years long wife which made people doubt that Heidi and Jason might be dating secretly.

Neither of them confirmed anything, and the rumors and accusations from Heidi were lifted as Jason got remarried to Catherine Panagiotopoulos in 2011. This made it sure that Heidi and Jason were only very close friends. Boston Red Sox player Nick Green was also linked to Heidi as her boyfriend; however, after being seen for some time together, they eventually broke up.

Heidi met the man of her dreams after all the obstacles that came on the way of her love life. After getting engaged, Heidi got married on 31st December 2014 in Edgewater, New Jersey to her boyfriend, Mike Wickham who is a Director of the Baseball Operations at Miami Marlins LLC. 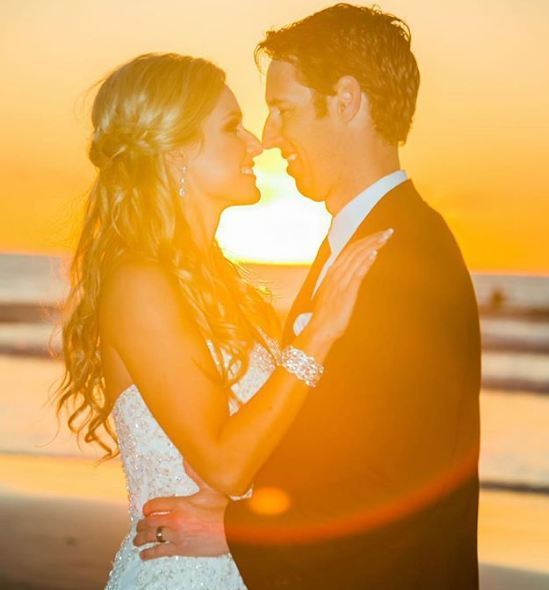 After their dream wedding, this couple went to Nevis Island in the Caribbean and Bora Bora for their honeymoon. Three years into the marriage, this beautiful couple welcomed their baby son Jax into this world on 5 June 2018.

Heidi was born in the year 1981 on 19th of May, as per her bio. Now of age 37, Heidi was raised in Fresno which lies in California of United States of America. Her family includes her parents, Mike Watney, Paula Watney and her brother Josh Watney. Heidi went to Clovis High School. Since she loved cheerleading, Heidi joined cheerleading during her high school days.

After graduating from high school, Heidi attended the University of San Diego where she got an academic scholarship and graduated with honors in 2003. She then decided to compete in Miss California Pageant. Even though she didn’t win the crown she took home the first-runner up’s prize.

Heidi started her career by working as the on-field reporter for the Boston Red Sox. She also became the host for shows such as The Red Sox Report and The Ultimate Red Sox Show on the NESN channel. Heidi also worked for ESPN Radio in her career. After 2008, she started working as a weekend sports anchor for a massive TV network called KMPH-TV.

Heidi had the opportunity to work as a sideline reporter for a show called Time Warner Cable SportsNet. In 2012 she made a bold decision by leaving Time Warner and joined MLB Network. Since 2013, she has been hosting a mega show called Quick Pitch. She is still continuing her job as a host for the show.